While gliding is not a dangerous activity, people who come flying must abide by some basic safety rules to ensure nothing can happen. The rules here are also in effect to protect the equipment that we use, as replacing broken equipment can be expensive. 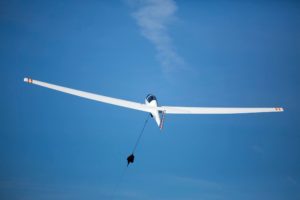 One of the main methods of launch is a winch launch, which uses a very powerful winch and long steel cables to accelerate a glider from 0 to 60 mph in less than two seconds. These steel cables (and the glider attached to them) pose a very significant hazard to anyone on the ground.

There is a warning buzzer on the bus when launching is taking place, and the lights on the front of the bus will be flashing to signal the winch. While a launch is taking in place, you should not be holding or stood near either of the two cables, even if it’s not the cable being launched because you can’t guarantee the winch driver has selected the right cable.

If you are at the winch end of the field, keep well clear of the winch while a launch is in progress – it is recommended you stand at least 15m away, or get inside a vehicle. The cables can land in unexpected places if the glider pilot releases it suddenly.

The launch point is generally where gliders both launch and land. They will land on both sides of the bus, and are pretty quiet. If you need to cross the airfield, you should ask someone, until you know how the airfield operates enough to get safely across yourself. Gliders will normally circuit around the airfield to land, but they can approach from anywhere in some circumstances. You should check that there are no gliders on approach to land before you cross the field.

If you are half way across the field and you notice a glider landing, stand still. The pilot will have seen you, and there is nothing worse than trying to avoid someone who is running around trying to avoid you! That said, if it is too late for the pilot to do anything, or it still looks like they are flying towards you, get out of the way quickly!

When driving on the airfield, the same rules apply – you should always check for gliders and planes landing before crossing the landing area. Aircraft always have right of way over ground vehicles, even aircraft moving around on the ground.

Although gliders will normally land at the launch point, they can land anywhere on the field, so you should keep a good lookout wherever on the field you are.

As well as winch launching, we also aerotow at Cranwell, using a motorglider. Both of these have propellers on the front, which you should stay well clear of when they are operating. Never hang anything off a propeller on the ground, or attempt to spin it, as it may start if the controls in the cockpit have been left in the wrong position.

The speed limit on the airfield for club vehicles is 20mph – this is to avoid breaking the springs, which are expensive and time consuming to replace. Slow down even further for the bumpier parts of the field.

Never leave the canopy of a glider open and unattended – on a windy day it can slam shut and smash. Even on a calm day, the tug or something driving by can cause a gust of wind, and it is good to get into the habit of doing it anyway!

Be careful with the parachutes. Always do the leg straps up before the chest strap – again, on a windy day, if you accidentally deploy the parachute, you won’t want to be dragged down the airfield by your neck. Never put a parachute on the ground – they can absorb moisture which may damage the chute. There is a place on the bus you can put unneeded parachutes. Treat them with a bit of respect – it is almost unheard of for one to be used, but they are a piece of life saving equipment nonetheless.